This morning we woke up to latest instalment of the Kimye V’s Swift drama explode on our twitter and snapchat feeds.

Pop singer, Taylor Swift, proved that ‘bad blood’ still existed between her and rap Icon Kanye West as she expressed her disapproval for West’s references to her in the song and video for “Famous”.

The song, which is featured on Kanye’s latest album, Life of Pablo gives reference to swift in the lyrics “I feel like me and taylor might just have sex… I made that bi*** famous”. The rather controversial video shows a Taylor Swift lookalike appear in bed naked next to an array of celebrities and politicians including Rihanna and Donald Trump.

Whilst camp Swift stuck up for the singer, selfie queen Kim Kardashian shocked us by revealing a video of a phone conversation between Kanye and Taylor to her 41 million followers. During the 40 second snapchat story, Taylor is heard approving the song prior to Kanye using it in his album, she was “flattered” that Kanye would reference her.

As Kim stuck up for her man and posted proof discrediting Swifts disapproval Taylor posted this image to her account, explaining her argument. 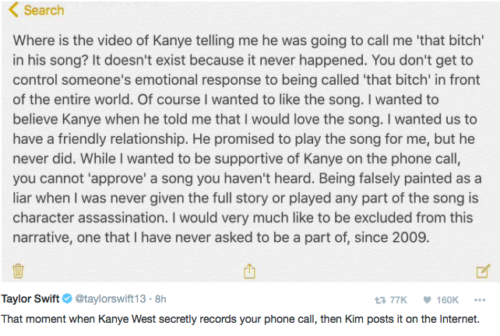 This sent fans and celebs reeling as #KimExposedTaylorParty trended world wide. Twitter EXPLODED with fans and celebrities alike all putting their two cents in, bashing taylor, sticking up for the singer and also a selection of creative memes poking fun at the whole thing.

Heres what was said:

As much as we love watching drama unfold, it’s important to remember that the celebrities being bashed are real people and all too often things get blown out of context. Just months ago we saw afro beats singer Timwa Savage exposed harshly on Instagram as her husband released a massive rant before deleting it just an hour later. From this one Instagram post, everyone knew the ins and outs of Timwa’s failing marriage which was later revealed in an interview.  (read more here)

Privacy is important. We can all relate to situations like Timwa’s, and if the shoes on the other foot would we really like to be exposed on social media like this? especially seeing as the whole story might not be given. As much as social media has become a massive part of our daily lives its sometimes best to leave some conversations of the internet. Choosing to expose someone can have an incredibly big impact on a persons life with situations snowballing out of control.

Anyway, What did you make of the Kimye v Swift drama? Should arguments and relationship feuds stay of social media?  do you think some things are better left private and have you ever been slammed online?

It’s the season of sequels! Kemi Adetiba’s “King of Boys 2” is in the works