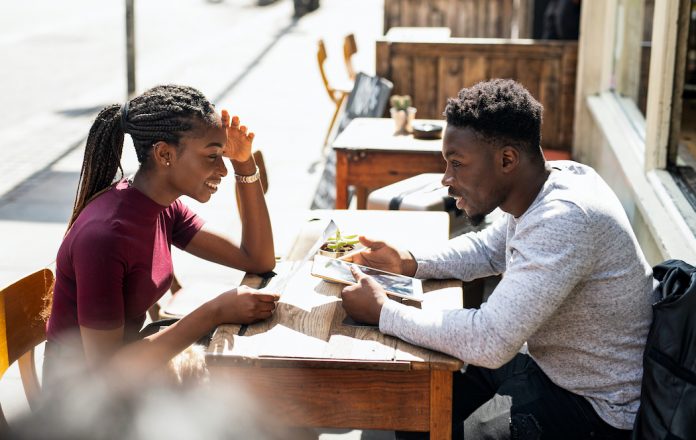 For Fatima, 23, starting her day includes checking her email for feedback from the many organisations she’s applied to for jobs. After that, she moves to Twitter, where she spends ample time tweeting and retweeting funny tweets. The app is most important to her because it’s a meme-lover’s dream, and her friends love to view her status updates on WhatsApp because she takes the memes from Twitter, and shares them there.

But when she’s not sharing funny memes, she’s speaking to me about her first relationship, with a man who was four years older than her. Her relationship with Abenelu, 27 was possible because of his younger sister. “I have had a crush on him since I was in JS2, but I let it go until SS3, when his younger sister who was my very close friend started shipping us,’’ she adds. Fatima remembers getting a message on Facebook from him, and that was the beginning of a relationship she’s come to hate. “I loved him. My friends didn’t like him, but I was doing strong head. At the beginning I was putting in more effort, then I stopped, and he started acting all lovey. Gifting matters to me and I made that clear to him. In the three years we were together, he only got me something for Valentine’s Day once, because I’d got him a gift and he then realised that he needed to do something. He quickly went to a shop and got me a bottle of perfume.’’

Businge, 25, is a Sex Educator/Blogger, and she spoke to me about dating Millennial men, as well as Gen Z-ers.  She speaks about her time with Femi, 24, a Gen Z-er whom she had mutual friends with on social media. “We officially met at a basketball game and later that week we started chatting via direct messages on Snapchat. Our conversations were fairly cordial until he asked me if I wanted to ‘chill’ at his apartment’’. She further mentions that they went on multiple dates for two months but never officially dated, because she thought he was “like the male version of my younger sister” and couldn’t get past that.

Speaking from her experience, Businge believes Gen Z men are a “dating app generation” and are not interested in courting like Millennial men. She says that her reason for not dating Gen Z men is about evolutionary and subconscious attraction. “Usually, older men are associated with resources and status, and that is subconsciously equated with having strong genes and being an ideal mate to start a family with.” She adds that a man’s ability to care for their children, if she decides to start a family in future, is something she thinks about more often since she’s grown older. There is also a physical dimension to her attraction. “I am generally more attracted to men who grow out their facial hair because it makes them look more authoritative, and that’s something I see more often in older men.”

Content Writer and Businessman Egharevba, 28, is celebrating yet another successful business venture, but more money isn’t the only thing he’s celebrating. His girlfriend Ogechi, 23, whom he met on social media is his source of joy.  The businessman never had any issues with dating outside his generation group, which is why dating Ogechi, a Gen Z-er, is so easy. He describes her as more emotionally aware. “She knows when to keep her distance and when to show more care. She understands my little efforts to make her happy.” He also says he has learned a lot from her, especially when they have deep conversations. “She makes me want to improve myself mentally.” Expanding on learning from Ogechi, he says: “There was that time business was bad. She went all out to research a new business line. Practically forced me to invest and it turned out good. She also taught me quite a lot about life. She’s so intelligent that I have to work hard in learning new things to level up. Of course we have our bad days too, but I do not regret meeting her.’’

Abena, 25, loves to cook and started a business, working as a caterer. At a party she attended in 2018, she met Bandile who was a 20-year old student, and the two started dating. “At first, I didn’t know I was older and when I found out about his age, I wasn’t discouraged because his level of maturity superseded his age, so I was cool with it. He was loving and caring and I loved the fact that he was intelligent. He also didn’t believe me, when I said I was older than him. Actually, I think even if he told me his age on our first date, I wouldn’t have been discouraged because he gave me more reasons to love than a 30 year old could.’’ For Abena, this relationship was an easy one. “He didn’t threaten me with gender, like when males say ‘I am the man in this relationship’.”Unfortunately for Abena, her relationship with Bandile ended, as distance kept them apart ‘’and little by little, everything faded away’’. She is however hopeful that she will start dating again, or reunite with Bandile and rekindle their love.

‘’He was very cool, very nice. I think that’s how I got attracted to him at first,’’ Temitope, 23, says about her relationship with Ismail, 30 whom she met through a mutual friend. She tells me it was a pleasant relationship in the beginning, until they began to have issues. Her teacher boyfriend wasn’t giving her attention. ‘’The issue we had was attention. It was a long distance relationship. I was in school in Osun state, and he was in Badagry, Lagos. We only saw each other a few times in a year, sometimes just once. I explained to him that attention was my love language and anything else didn’t matter. Make me feel like an important part of your life’’, the radio presenter said gloomily. When Ismail wasn’t forthcoming, it became a problem for her. She was stressed out by his negligence and gaslighting. “If I didn’t call him for one week, we wouldn’t talk. Sometimes I would call him and he would ignore my calls, then call back later and say he was busy. If I complained about it he’d say I complain too much. He made it seem like I was the one with issues in the relationship. I was always crying and feeling sorry for myself. I had to breakup with him for my  own peace of mind.’’

When Kamali, 23, isn’t at the hospital doing ward rounds, you’ll often find her tweeting about the woman she buys vegetables from after work. She talks about her current partner Matthew, 30, whom she started hanging out with because they had mutual friends. ‘’We started hanging out and had  a thing that almost became a thing. We let it go because it wasn’t feasible. Fast forward five years, I almost dated his cousin, but personality differences didn’t allow us to move to the permanent side. Ironically, his cousin felt that Mathew and I would be a good fit, and so we told him about how we’d almost had a thing years earlier. He encouraged us to talk and it turned out we were very compatible’’. Even though she loves her relationship with Matthew, Kamali tells me of another Millennial whom she dated in the past, a 31 year old man named Senlong. “We started dating because I wanted to get over my crush who was also a Millennial. That was the worst relationship I have ever been in. Was it the misogyny, gaslighting or infidelity?’’ On eventually ending the relationship with Senlong, she said she realised she was finally over her crush and had lost interest in the relationship. They both ghosted each other until she called it off. As for her, the relationship with Matthew is good for her because of his commitment, and the support she gets from him, unlike Senlong who didn’t want her to advance in her career. “Matthew doesn’t believe in gender roles and is a lot kinder and more thoughtful. He listens to me and doesn’t put me down even when he thinks my idea doesn’t make sense. Also, he doesn’t stress me.”

These individuals continue to experience life and share their experiences with everyone around them. For Fatima, she is certain that she will not date a fellow Gen Z-er like her because she doesn’t have faith in them, she’ll continue to pay attention to basketballers, as she has a particular preference for them.  Businge desires to continue growing in her career and reaching people, and when she decides to start a family, she’d very likely end up with another Millennial. Kamali wants to continue enjoying a stress-free relationship, while Egharevba hopes to grow his business and learn as much as he can from Ogechi. Meanwhile, Miremba wants to focus on school for now, and Abena is looking forward to reuniting with her estranged love, Bandile, once again.