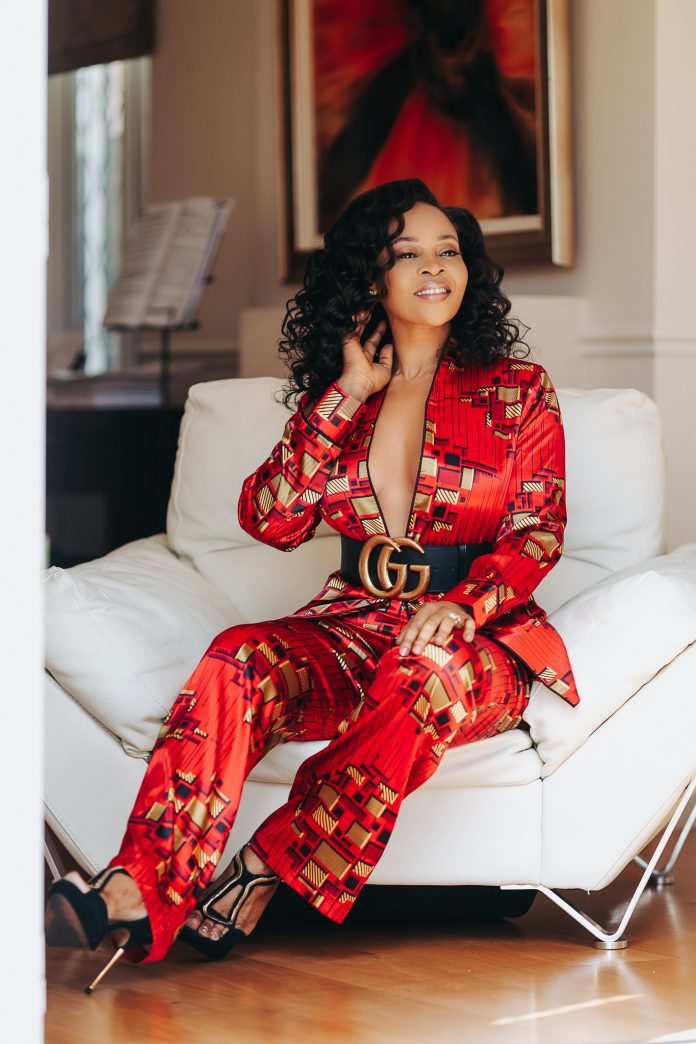 Today, she’s a businesswoman, a philanthropist and a partner at her husband’s healthcare consultancy company. But while Cathy Martin is sitting firmly at the top of her game today, her remarkable story begins in wildly different circumstances. Born to humble beginnings, Cathy Martin grew up in Zimbabwe, the youngest sibling in a family of nine children. Her father, Peter, worked as a gardener in exchange for an education, eventually becoming the head teacher at a local school. Decades later, Cathy cites her late father as a key influence and source of personal inspiration for her.

“My dad always told us that education was your first certificate in life and he ensured that we went to the best schools because he really believed education was an equaliser. He would always say, ‘If another child can do that, then you can. Whatever you put your mind to you can achieve, but never compare yourself to anyone else and always stay true to yourself’, and this is the lesson I’ve carried with me all my life.”

As a schoolgirl, however, Cathy struggled immensely, failing many of her exams and repeating most of her classes. In school, students were grouped into sets according to their perceived intelligence, and Cathy always found herself in the bottom group, branded stupid by students and teachers alike.

“I remember once I failed a science test and the teacher said ‘I don’t know if some people have brains or water’, in front of the whole class. Everyone laughed at me. That experience, it broke me. I started being bullied after that. I would really cry whenever my dad dropped me at school because it was back to the bullying, especially during exam periods. The ‘bright’ students would always finish their exams first and then come to our class window to laugh and make fun of the dumb ones who took longer to finish their exams.”

While she always made it through in the end, Cathy’s academic struggles persisted, following her into adulthood. As a nursing student at the University of Nottingham, Cathy had to resit her final exam twice, narrowly escaping being kicked off her course entirely. She got a job at Broadmoor Hospital, a high-security psychiatric facility in Crowthorne. However, Cathy left shortly after, keen to escape the toxic situation she had found herself in, as her colleagues soon ganged up against her.

“They would accuse me of things I couldn’t possibly have done. The manager and some of the other nurses accused me of having a relationship with one of the patients, which wasn’t even possible because of the way the ward was set up. It was a high security building. I realised this situation was no longer healthy for me. It felt like I was back in school being bullied again, except it was much worse this time.”

After leaving Broadmoor, Cathy retrained as a cosmetic nurse and began a new job. Unhappy once again with the treatment she received there, Cathy handed in her resignation just 9 months later, packed her bags and relocated to London, hoping to start her own business. It was there that she met her husband-to-be and gave birth to her daughter. 7 months after baby Megan was born, Cathy returned to school once again, undeterred by her past struggles, to pursue a course in Prescription. It was there, at the University of Essex’s Colchester campus, that Cathy’s life changed forever.

“In 2012, we had a mock exam to test our drug calculation. I actually got all the answers right, but by the time I’d finished the exam I was way out of time. I had a tutor who was the head of health and social care. He asked me if I was dyslexic and I said ‘no, I’ve just always been slow with tests’. He thought I should get tested anyway just to be sure. The results came back and it turned out I was 94.4% dyslexic. That day, I broke down and cried. I just thought, ‘Oh my God, I’ve struggled all my life not knowing what was wrong with me until I was almost 40. From then on, I was given extra time and passed all my exams in one go. I was ignorant to my dyslexia for four decades, but that tutor changed my life. After that day, I never looked back.” 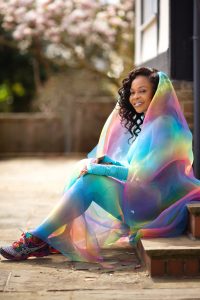 Cathy worked hard to let go of the hurt and pain of her past, loking towards a brighter future. Shortly after moving to London, Cathy had sold her car to get her new business, Skin By Cathy, off the ground. She opened her own clinic in Swiss Cottage which specialised in non-surgical skin treatments. Business-wise, Cathy began to flourish. But her clients’ interests seemed to go beyond just the skin treatments they were receiving. Cathy would often share stories of her transformation from a size 24 to a size 8, and with thousands of clients in her catalogue, many were keen to know the secrets to Cathy’s weight loss success.

“It started during my time at Broadmoor Hospital. I was doing therapy for psychiatric patients, but internally I was battling demons of my own. When I was at my heaviest, I desperately wanted to lose weight because I thought if I lost weight I would be accepted – that people would love me. I tried every diet under the sun, to the point where I would eat nothing in a day except for an apple and go to sleep at 4 pm. Nothing worked. It got so bad that I would end up binge-eating and then I would make myself throw up everything I’d eaten. But one fateful day I had an incident that changed my life forever.

“I had tried to make myself sick by pushing a fork down my throat. But the fork got so wet and slimy that I couldn’t pull it out. The more I tried to pull, the deeper it went. I panicked and grabbed a tissue with my other hand and managed to grab the tip of the fork. I pulled it out just in time and there was blood everywhere. I remember just breaking down afterwards and wailing. I knew I couldn’t continue like this.”

Cathy struggled for several years, repeatedly swearing off her unhealthy eating patterns, only to relapse and return to old habits in a seemingly unbreakable cycle. One day, Cathy told herself she had had enough. She bought a treadmill and started exercising in front of her TV. On some days she would go for a walk or a jog around her neighbourhood. While she initially wore hoodies to hide her face from her neighbours, overtime she built up her stamina – and her confidence.

Fast forward to her days running her Swiss Cottage clinic, Cathy decided to train and get a qualification as a nutrition and weight management consultant so she could give her clients health and nutritional advice without having to rely on her personal experiences alone. With the foundations laid by Skin By Cathy, she diversified her business into a wholesome lifestyle brand. Today, her brand, Body By Cathy, covers everything from cookbooks and supplements to beauty and activewear.

“My nutrition course really helped me because I learned not to be afraid of food. You can enjoy your food, but just be mindful of your portions and eat in moderation. Everybody’s journey will be different. For example, if you don’t like going to the gym, you might try something as simple as walking every day for an hour or thirty minutes. If you can’t keep away from chocolate bars, try cutting the bar in half and only eating a bit at a time. It’s all about the little steps. The most important thing I learned during my journey is not to put yourself under pressure. Listen to your body. Take each day as it comes. A lot of people fail because they put a number on their journey and stop there. If you say ‘I want to drop two dress sizes’ or ‘I want to lose 30 pounds’ and then you stop working out or paying attention to what you eat, you’ll go right back to where you were before.”

In 2020, Cathy expanded her brand further by launching her own activewear line called Fitwear By Cathy, aimed at creating diverse pieces for people of all shapes and sizes.

“The fitwear for me was so important. I used to find it very difficult to go to the gym because every time I tried to find something to wear, I’d always end up in a large, shapeless T- shirt or baggie shorts, but everyone else at the gym would look so great. It made me feel out of place, like I didn’t belong there, and the gym was only meant for slim people. I wanted to make pieces that catered to women of every size. Everyone deserves to have fitwear that makes them beautiful while they’re in their change process. I truly believe that beauty is not defined by the size of your waistline. I want my fitwear to inspire and empower women to love themselves no matter their shape or size.”

Cathy’s story proves that no matter where you come from, with the right support and motivation, anyone can activate the potential inside them to make their dreams a reality. While the COVID-19 pandemic has forced Cathy to put some of her plans on pause, she remains hopeful for the years to come, and has big plans for her lifestyle brand in the years to come.

“2020 was rocky for me but things picked up towards the end of the year. I was featured in Glam Africa back in October and I made a lot of sales afterwards from people who had read my story on the Glam Africa platform, and after that I was approached by Vogue, who featured me as well. Even though things didn’t quite go as planned last year, I am so grateful for my brand and the support system I have full of people who genuinely care for me and root for me. I am blessed with a beautiful family, including my husband who is my rock. I’m so grateful to have his support every step of the way. Now I’m just making up for lost time and nurturing everything I have worked so hard to build.”

To find out more about Cathy Martin and the Body By Cathy brand visit www.bodybycathy.com, or find Cathy on social media @bodybycathy @fitwearbycathy @mealsbycathy. 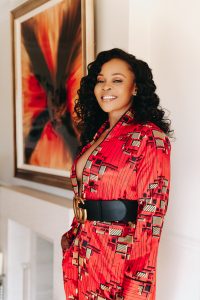