We are beyond excited to be hosting you tomorrow evening Glam Squad! As you know we’ve teamed up with the MOBO Organisation to bring you our very first Fashion Talk session, a panel discussion on the fashion industry and so much more. A few days ago we shared with you members of our panel. And guess what! We’ve invited more specialists to taje a seat at the GA table to bring you a Glam evening.

Àsìkò is a visual artist who expresses his ideas through the medium of photography and mixed media. His work is constructed in the narrative that straddles between fantasy and reality as a response to his experiences of identity, culture and heritage.

His project ‘Layers’ was featured on the BBC and Huffington Post and exhibited at the South Bank in London. His recent project ‘Adorned’ was recently exhibited at The Gallery of African Art in London and made up his first solo show at Rele Gallery in Nigeria. He currently creates works in London and Nigeria. 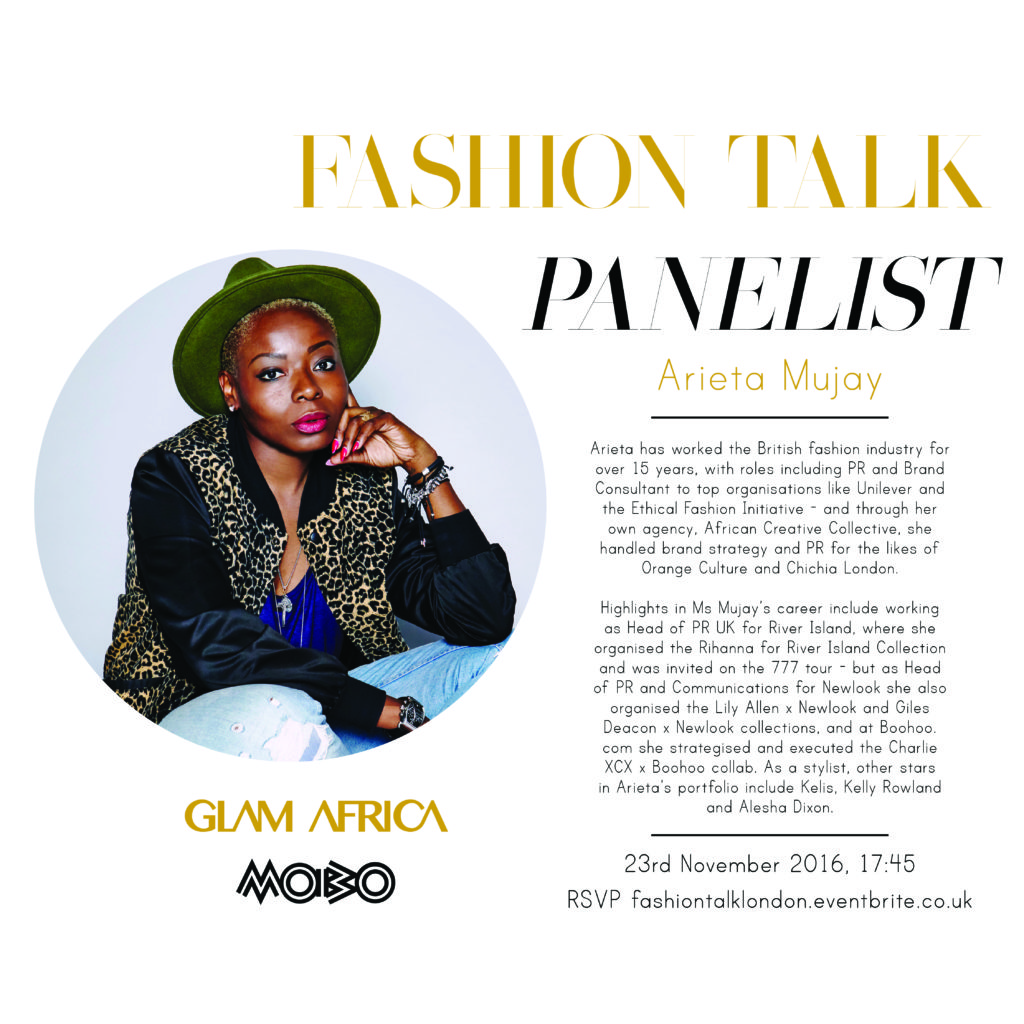 Arieta Mujay has worked in the industry for over 15 years, with roles including PR and Brand Consultant to top organisations like Unilever and the Ethical Fashion Initiative – and through her own agency, African Creative Collective, she handled brand strategy and press for the likes of Orange Culture and Chichia London.

Highlights in Arieta’s career include working as Head of PR UK for River Island, where she organised the Rihanna for River Island collection and was invited to go on the 777 tour – but as Head of PR and Communications for New Look she also organised the Lily Allen x Newlook and Giles Deacon x Newlook collaborations, and most recently at Boohoo.com, she strategised and executed the Charli XCX x Boohoo collab. As a stylist, other celebrities in her portfolio include Kelis, Kely Rowland and Aleshia Dixon. 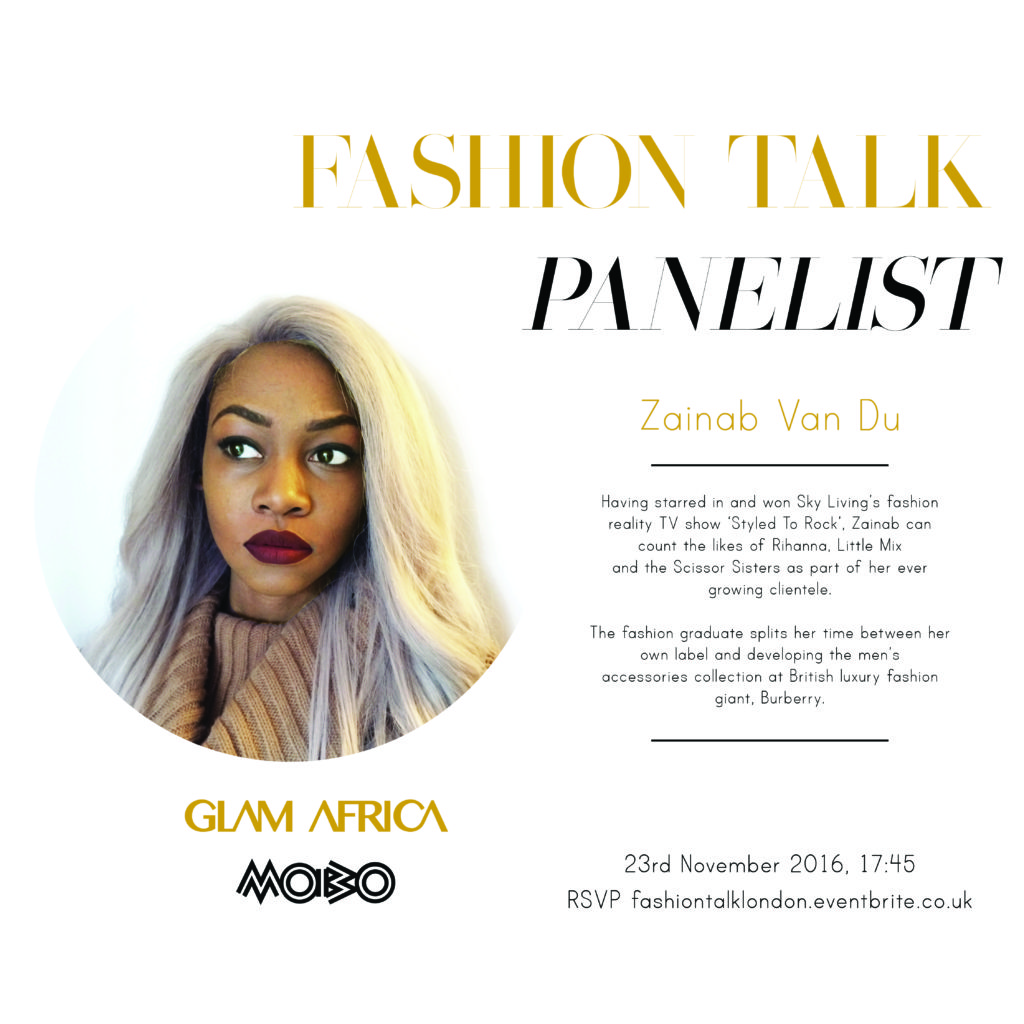 Having starred in and won Sky Living’s fashion reality TV show ‘Styled To Rock’, Zainab can count the likes of Rihanna , Little Mix and the Scissor Sisters as part of her ever growing client roster. The Fashion graduate splits her time between her own label and developing the Men’s accessories collection at British luxury fashion giant Burberry. 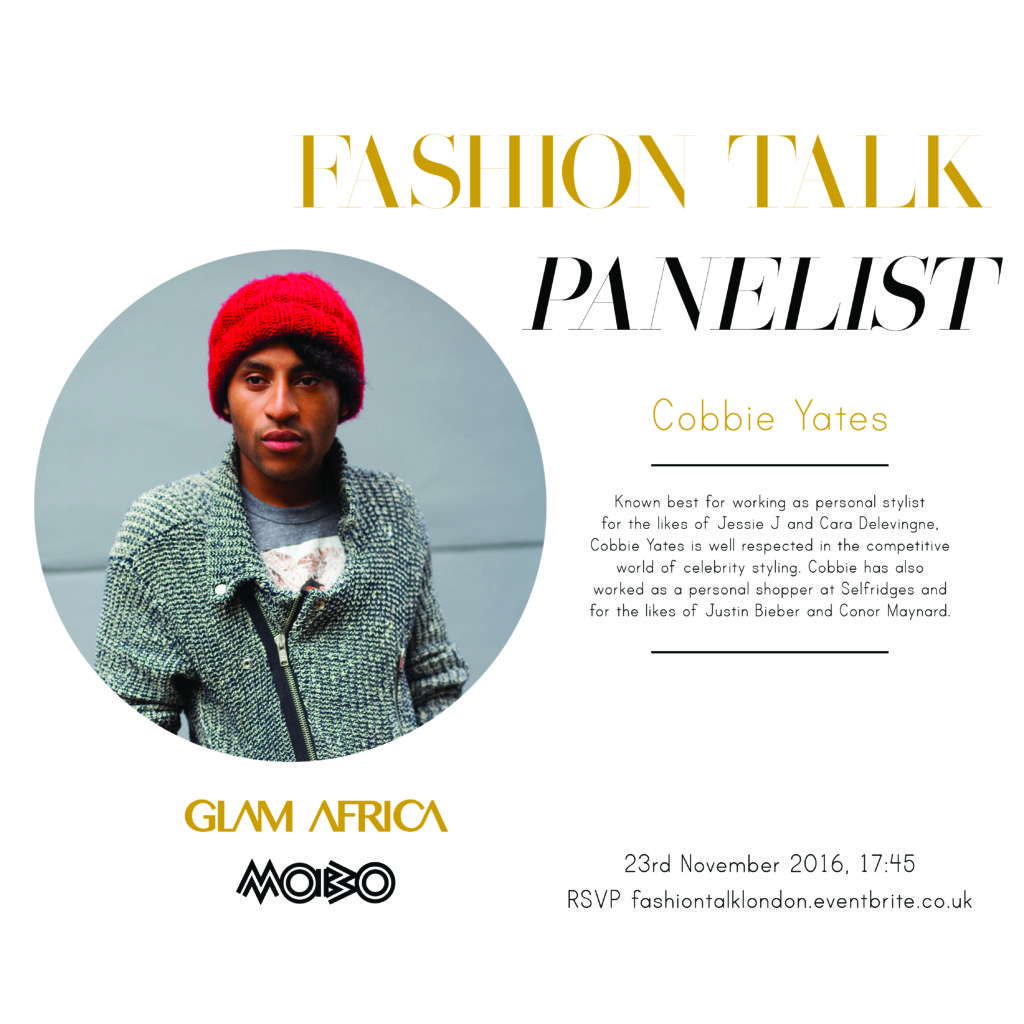 Known best for working as personal stylist for the likes of Jessie J and Cara Delavigne, Cobbie Yates is respected in the competitive world of celebrity styling. Cobbie has also worked as a personal shopper at Selfridges and for the likes of Justin Bieber and Conor Maynard.

Sabrina comes with bags of experience across business, finance and marketing across the worlds of entertainment, fashion and music. She has worked with companies including Barclaycard, Microsoft, LVMH, Puma x McQ and currently fronts the G-Star RAW brand, as UK Marketing and PR Manager. 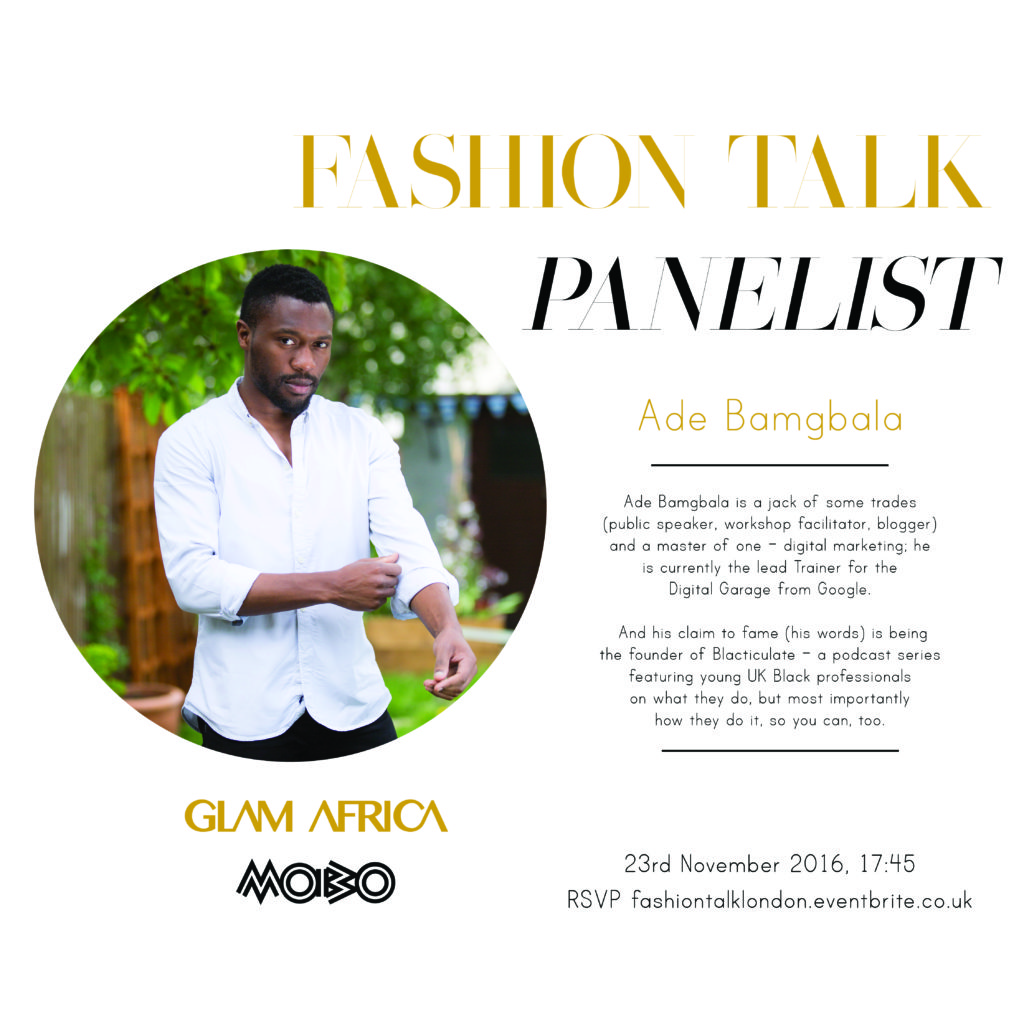 Ade Bamgbala is a jack of some trades (public speaker, workshop facilitator, blogger) and a master of one – digital marketing; he is currently the lead Trainer for the Digital Garage from Google.

His claim to fame (his words) is being the founder of Blacticulate – a podcast series featuring young UK Black professionals on what they do, but most importantly how they do it, so you can, too. 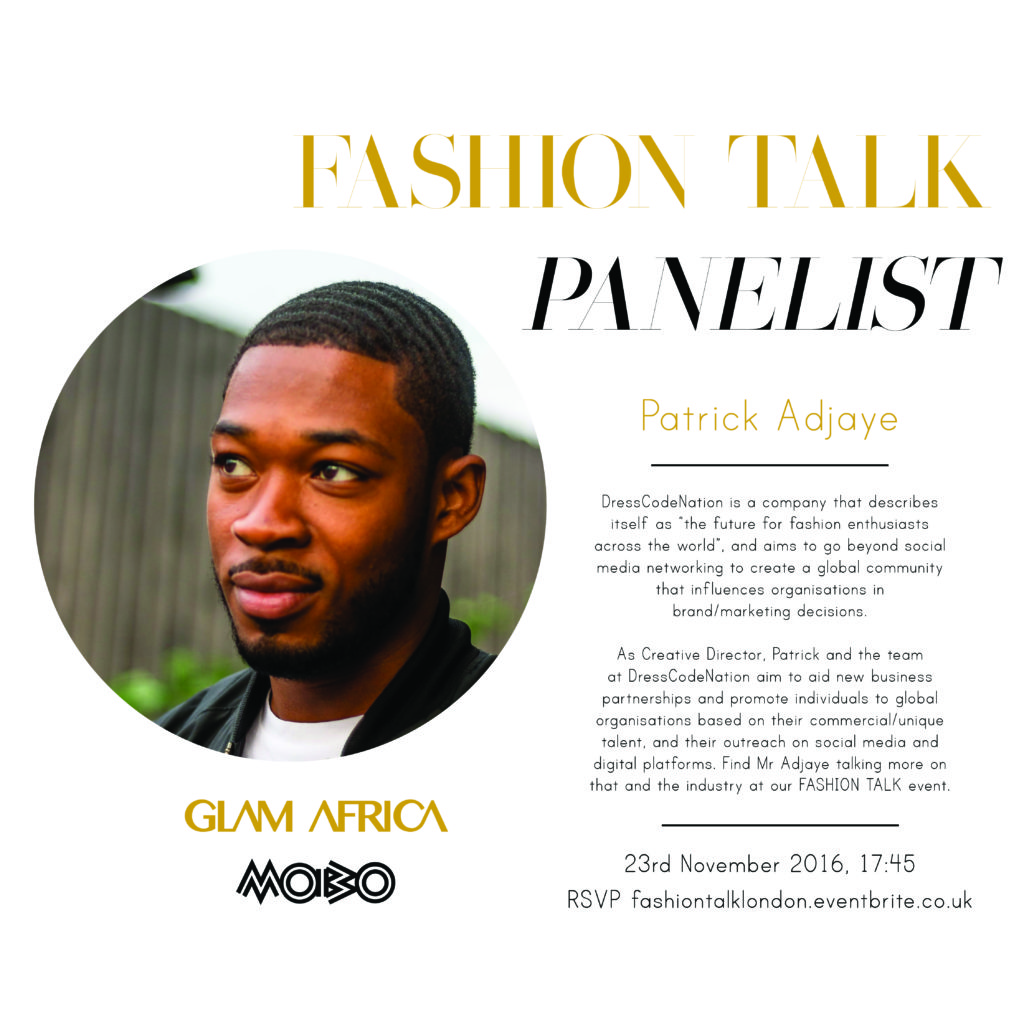 DressCodeNation is a company that describes itself as “the future for fashion enthusiasts across the world”, and aims to go beyond social media networking to create a never before seen community which will help connect and influence organisations in brand/marketing decisions.

Creative Director Patrick Adjaye and his team aims to aid new business partnerships and promote individuals to global organisations based on their commercial/unique talent, and their outreach on social media and digital platforms. He’ll be sharing insights on the industry at our #FashionTalk. 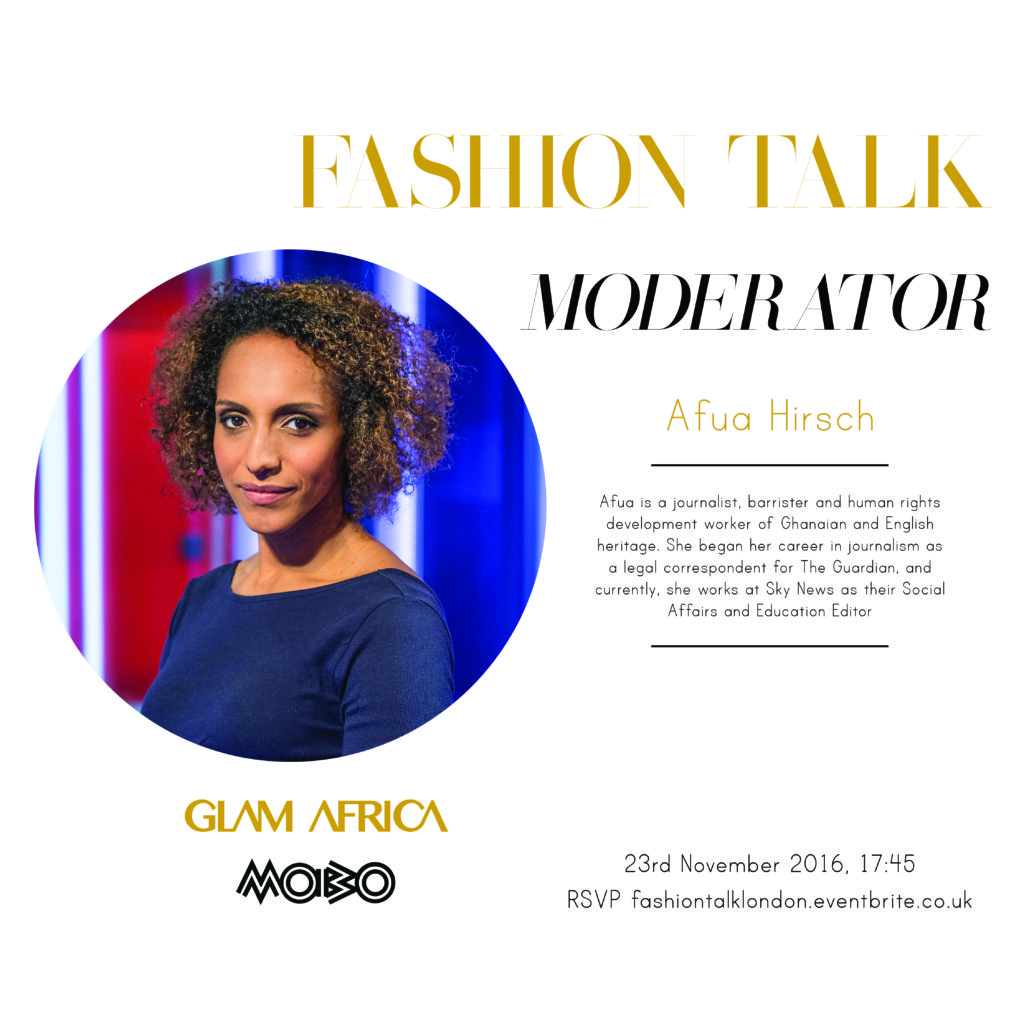 Afua is a journalist, barrister and human rights development worker of Ghanaian and English heritage. She began her career in journalism as a legal correspondent for The Guardian, and currently, she works at Sky News as their Social Affairs and Education Editor in early 2014.

‘Fashion Talk’ by MOBO and Glam Africa will broadcast live on Facebook. This is recommended for those who are unable to physically attend or those residing in other parts of the world. Information on how to watch the Live feed will be published on Eventbrite on or before 6pm on Monday, 21st November 2016. Email event@glamafrica.com should you require further information.